Manurewa High School gained a new learning space thanks to a partnership with MIT and local businesses.

The School of Engineering and Trades had been interested in working on a project that enhanced existing relationships while putting trades skills on show.

The idea was mentioned to the school that was already planning to repurpose three shipping containers that had been donated to them. 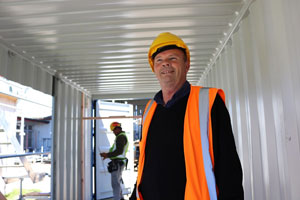 It was decided this was a golden opportunity to work together.

The first container arrived at the School of Building and Civil Construction in Ōtara early October 2017 and was refitted so it can serve as both an educational and community facility.

Some of the work included doorways being cut out and ranch sliders (donated by New Look Windows) being installed, the container was insulated and lined, and electrical work was done providing the unit with a kitchen cabinet.

“It’s about giving back and showcasing what the students can do,” says School of Engineering and Trades – industry manager Peter Murphy. “It enhances the ongoing relationship between MIT and Manurewa High and provides a space for the community and a common room for the students.”

On Thursday 26 October 2017 the container was picked up and delivered to the premises of key sponsor Mitre 10 in Manukau.

The work was completed onsite over the following weekend which allowed an opportunity for the public to engage with staff and students to get a better understanding of how all the partners are working together to train the next generation of trades people.