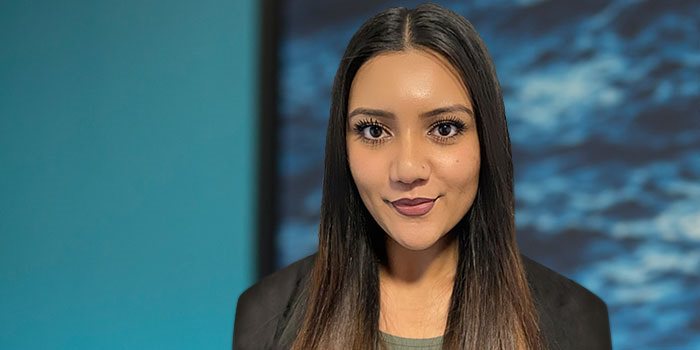 Like most 10-year-olds, Sabrina Papps (Ngāti Apa) wasn’t allowed to use social media.

But instead of waiting till her parents would allow her a Facebook or Instagram account, she created her own platform, inviting her friends and whānau to join to play games, enter competitions and message each other.

More than a decade on, the Bachelor of Digital Technologies graduand used the same initiative to not only find her own industry placement through LinkedIn, but invite two other fellow students to join her.

The placement project involved creating a warehouse management system using artificial intelligence for online supermarket Totara and Bear, an upcoming grocery retailer that pays users to recycle their waste packaging, and in return, they receive a discount on purchased products.

The team implemented a tool called OptaPlanner which allowed AI to allocate orders by choosing the optimal route for a customer’s box to travel on the conveyor belt making sure it did not collide with obstacles or any errors interfered.

“The team and I set objectives every week, then had meetings with the client to update them on progress,” explains Sabrina.

“We were using an AI tool that helps businesses to solve their user cases whilst saving time and money, allowing their process to become automated, efficient, and cost-effective - an experience that I know many students wouldn’t have exposure to,” she says.

The project was successfully implemented with Sabrina and the team achieving an A+. A grade she is very proud of.

The 22-year-old now has a great job lined up as a Business Analyst at Westpac in Britomart, part of their core infrastructure group.

“My Bachelor of Digital Technologies helped me gain my current job, as I was exposed to different situations, stakeholders, requirements that really helped me to portray these different skills in my interviews with Westpac,” explains Sabrina.

“In 5-years' time, I see myself not only studying to gain higher qualifications, but my heart wants to become Chief Technology Officer of Westpac - it's always been a dream to lead people and bring the best out of my team, as well as transformation.”

(A screenshot of Sabrina’s own social media platform she made when she was only 10-years-old.)

From a young age Sabrina’s whānau realised she was tech-savvy with a high school tutor encouraging her to take NZQA Digital Technologies/Computing.

Her introduction to MIT came through the Trades Academy scheme which allows secondary students to acquire vocational skills as they complete NCEA. While trades and hospitality are part of the scheme, there’s also the option to focus on information technology futures as well.

“I fell in love with MIT because of how the courses were delivered,” she explains.

“The lecturers were highly engaged with students one-on-one and there was so much practical hands-on experience that wasn’t available elsewhere. I gained the soft and technical skills that employers want.”

In 2017, Sabrina started studying towards a Bachelor of Digital Technologies, specialising in Software and Web Development.

“The environment is so welcoming and easy for students to study in,” says Sabrina.

“Being a Software and Web Development graduate, I’ve gained a full range of hands-on experiences such as creating websites, games, management systems, Android, and iOS applications. If I were to go back and study, MIT would be my only option.”

From teaching her in MIT Trades Academy to being her industry supervisor in her final year six years later, Senior Lecturer Garry Singh isn’t surprised that Sabrina is jumping straight into a well-paying job.

“Sabrina has always been a very strong communicator – I believe that’s why she’s already seen so much success,” says Garry. “She has always believed in herself, and she wasn’t afraid to reach out if she needed help. Now look at her, she is jumping from her studies straight into a fantastic role with Westpac.”

Of Māori, Fijian-Indian and European heritage from the suburbs of Ōtara, Sabrina would love to see more young adults, especially women, use their roots to embrace who they are, and realise anyone can achieve anything no matter where they come from.

“Technology is for everyone – let's close the gap of our Māori and Pasifika community and try to influence our people to embrace their talents, I guarantee that there is a field in technology suited for everyone - I just happen to love Software sides of things,” she says.