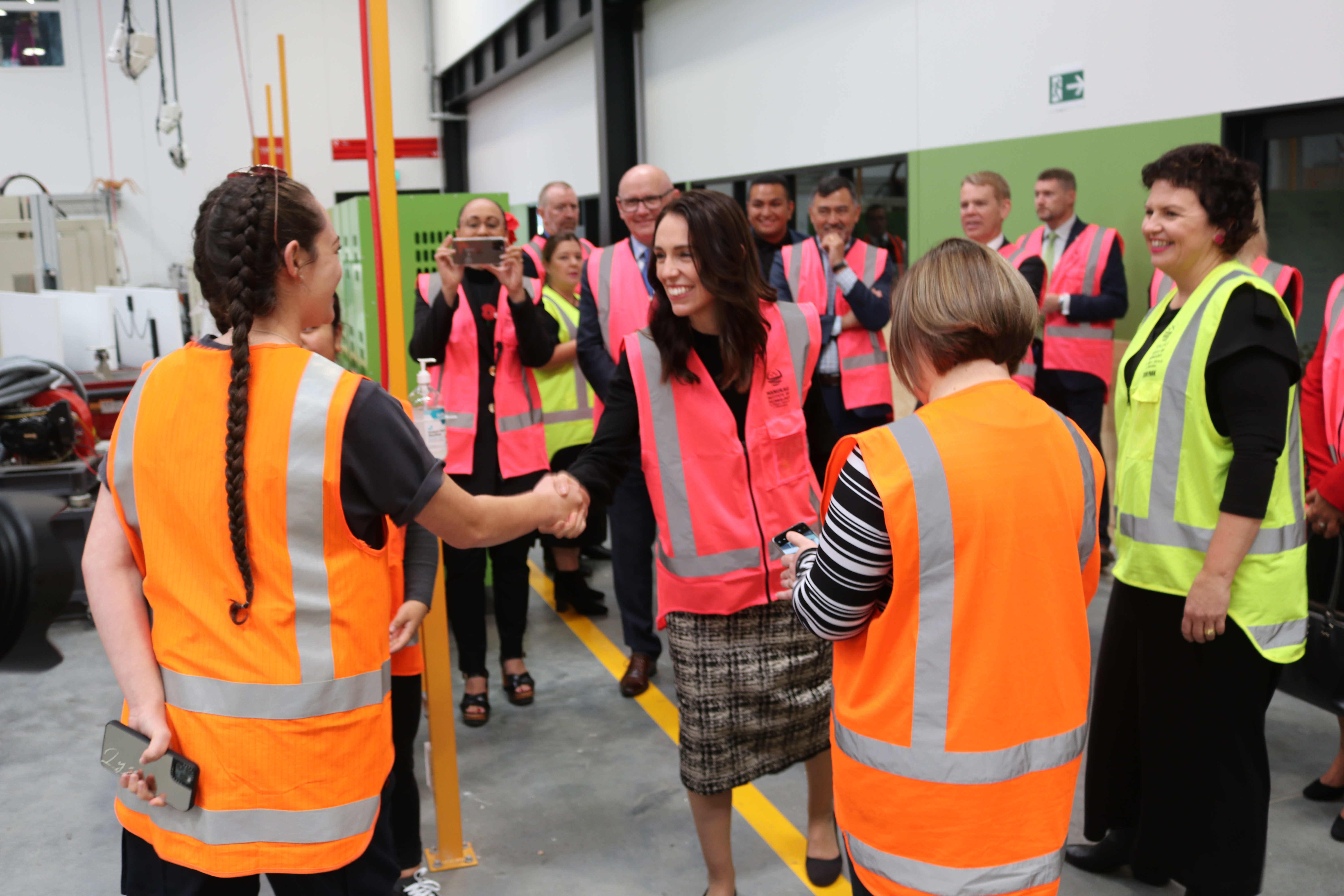 Below is a transcript of the speech she gave after greeting the assembled audience and acknowledging dignitaries at the event, Mana Whenua and the representatives of Kiingitanga.

In the lead up to today, I’ve learnt some of the stories of people who have trained here at MIT and the difference it’s made to their lives.

People like Hera who Newshub’s The Project described as ‘very, very cool’ who was a stay-at-home mum of two children, but today is a trainee tutor at MIT’s School of Plumbing and Gasfitting, whilst doing a plumbing apprenticeship.

People like Faith and Loti, who completed their NCEA Level 3 Building and Construction at MIT and intend to start up a womens’ trades club showing women and girls what’s possible.

Alyssa, who never saw herself doing electrical engineering, but is now doing a cadetship with Northpower, thanks to the partnership between the company and TechPark.

But that does not mean the sector is representative. I’m told just eight percent of students studying at TechPark are women and – of course – nationally we must continue to do all we can to lift the diversity of our trainees and our learners across the board.

Māori and Pacific learners have long been underrepresented at the tertiary level in education. That’s why we have set a five-year goal to achieve the same level of participation and achievement for Māori and Pacific learners, as for other learners in tertiary education and I want to acknowledge MIT is playing a huge role in helping to achieve that.

You’re an example of the creative and connected way we can make training and education – as it should be – for all.

Pacific and Māori make up nearly half of your total roll and you are our largest educator for Pacific peoples, so thank you for the work you are doing, but let’s keep spreading that work across the country.

We have a very clear plan to make sure we are building enough houses for all New Zealanders, that we are investing in infrastructure, that we are transitioning New Zealand to a low carbon future, as part of some of those enormous goals we need more tradies and we need to prepare more learners to work with green technology, such as solar power and electrified transport, technologies we’ll bee more of in a low emissions future.

We need a workforce that is fit for today’s needs, but also tomorrow’s expectations.

We recognised that particularly as a result of COVID, there would be uncertainty over jobs and study for so many of our people.

We were worried that people in training and apprenticeships would drop out before they were qualified, leaving a skills gap that we would feel the impact of for years to come.

We knew it was important for our economic recovery to keep people in training in trades and support employers to retain and actually employ new apprentices.

That’s why we injected $320M into free trades training in critical industries to help people to retrain in targeted areas, but also to allow new employees in essential services to retrain on the job.

As a result, more than 100,000 New Zealanders have taken up free trades training since July last year.

Meanwhile, more than 10,000 employers are receiving direct support to keep up and take on apprentices.

BCITO said the other day, apprenticeship sign-ups had gone ‘gangbusters’ and they are having to grow their teams to match demand to their services. They could not be happier about it and neither could we. 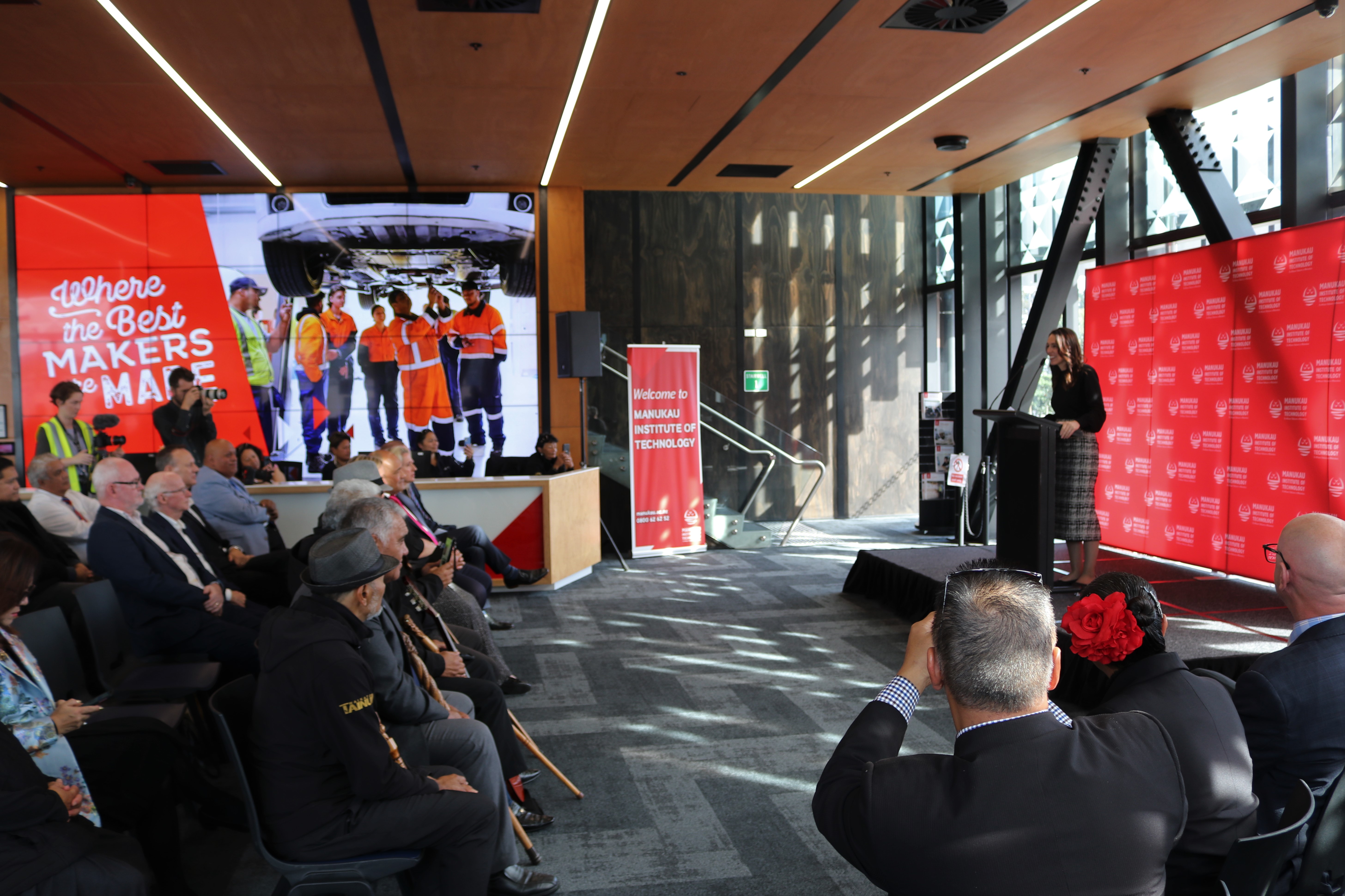 Investments like TechPark can only build on the gains we have made and I do want to congratulate everyone who has been part of this project.

It will also make a significant contribution to the project of rejuvenating Manukau. It brings all MIT’s trades and engineering schools under one roof for the first time.

I’m told more than two thousand students from around New Zealand will use this building to learn critical skills in construction, engineering, plumbing and gasfitting, refrigeration, electrical and automotive. Having all these disciplines under one roof provides huge opportunity for collaboration between these areas.

MIT also aims for TechPark to play an instrumental role in its trades academies, something that again puts it at the heart of the community.

These academies target learners in low decile schools who are underperforming in the traditional school environment, not for anything they have done, but perhaps for lack of what we have done for them.

Their interest in a career in trades and technology will be supported by enabling year 11 to 13 students to combine study at Trades Academy with NCEA studies keeping these young people in education and on a path to success and prosperity has the potential to be an economic game changer for them and their whānau and the benefits of the potential will flow through the community for generations to come.

Before I finish today, I just wanted to acknowledge that one of the things for this day and TechPark is ensuring that this is a mana-enhancing place for everyone who passes through here.

I remember that when we came into government we were really concerned that one of the reasons we weren’t seeing enough young people coming into the industries you are training for here is because they had long been under-recognised for their importance and the role they play in ensuring our economy is running.

I couldn’t help but reflect on a memory from when I was growing up. I literally remember the day when there was a wave of gossip in the town I grew up in – Morrinsville – when people found out the local plumber was earning more than the local lawyer and how pleased everyone was for the recognition of that trade.

So when we came into government, we started rolling out the only award that has the title of Prime Minister and it’s the Prime Minister’s Award for Vocational Excellence. It is in every high school across the country, accompanied by a cash award to support a young person with their future in vocational training and trades.

Part of the reason we did that was to bring back the mana and dignity of the work that you do in these places and in those industries which we need to recognise.

Of course, those who want and want to go to uni should be supported but let’s not underestimate the importance of these roles in our communities let’s lift their status to where they deserve to be.

The fact – TechPark is such a beautiful place that adds to the mana of what the young people here will learn, I want to thank you for the role you are playing.