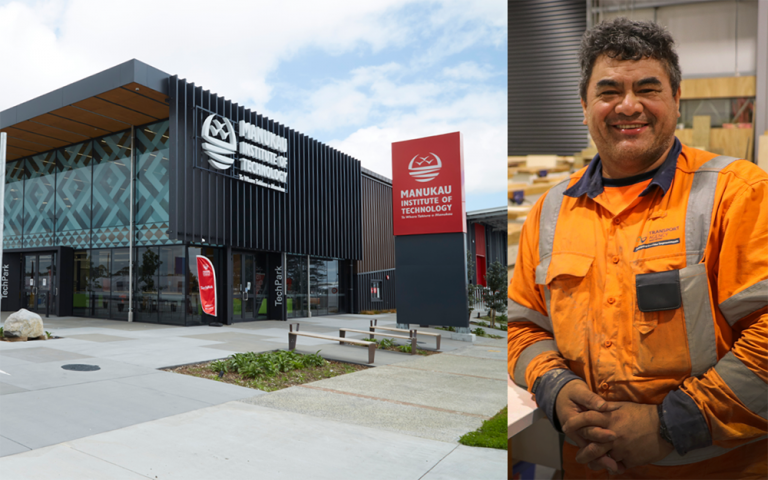 The 9,000 square metre, state-of-the-art complex officially launches on Friday 23 April at a time when there is increasing demand for vocational skills training from those transitioning between employment sectors.

Monsell Nathan knows a thing or two about changing jobs. In his 57 years, he’s been a horticulturalist, a receptionist, an accountant and a stay-at-home dad.

When his father-in-law encouraged him to come work with him, he decided to embark on yet another new career as a builder.

“I’ve had heaps of guys in my field telling me I’m too old for this,” says Monsell. “My response to that is always the same – ‘why is a guy who’s twice your age working twice as hard as you?’

“You are never too old, the only time it’s too late is when you’re dead.”

After earning a Certificate in Construction Trade Skills (Level 3) with a strand in Carpentry at MIT, he is now completing a carpentry managed apprenticeship for free through the Targeted Training and Apprenticeships Fund (TTAF) while working for HEB Construction on Auckland’s North Shore.

Government support for trades training, uncertainty in the job market caused by COVID-19 and increased awareness of what vocational education can do to help learners gain high value employment has driven demand.

In 2021, trades and engineering programmes at MIT experienced a 36% increase in enrolments compared with the previous year and significant growth in enrolments for Māori, Pasifika, female and mature students.

“My advice to anyone who would be thinking of transitioning is just to give it a go. If you don’t start now, you’ll never know,” says Monsell.

He feels he has an edge on new graduates coming into trades because of the life he’s already lived.

“After the 10 years I’ve spent as an accountant, I can do all my financial records. All these others guys have to go and learn all of that,” he says.

Acting TechPark General Manager Pip Schollum-Manase says the professionalism and timekeeping of those coming from the workplace is a good influence on younger students.

“Our age group has gone up because of those men and women who have been given the opportunity to retrain with Government support. This is what we are here for. There are lots of job opportunities coming onstream right across construction and infrastructure,” she says.

Monsell’s long term goal is to eventually build houses for each of his children by the time they are ready to start their own families – “My kids are 9, 11 and 13, and I don’t want them to worry about buying a house – there are too many stresses in the world and this is my way of helping”

MIT TechPark is opening at a time of increasing innovation and collaboration in the vocational training sector to support strong pathways and transitions.

The campus is the regional host for Construction and Infrastructure Centre of Vocational Excellence (ConCOVE).

The centre is a national network of sector groups and education providers responsible for redesigning training to help the industry adapt to technological change, decrease the time it takes apprentices to become engaged in meaningful employment, increase diversity, foster environmentally-sustainable practices, while improving productivity and retention.