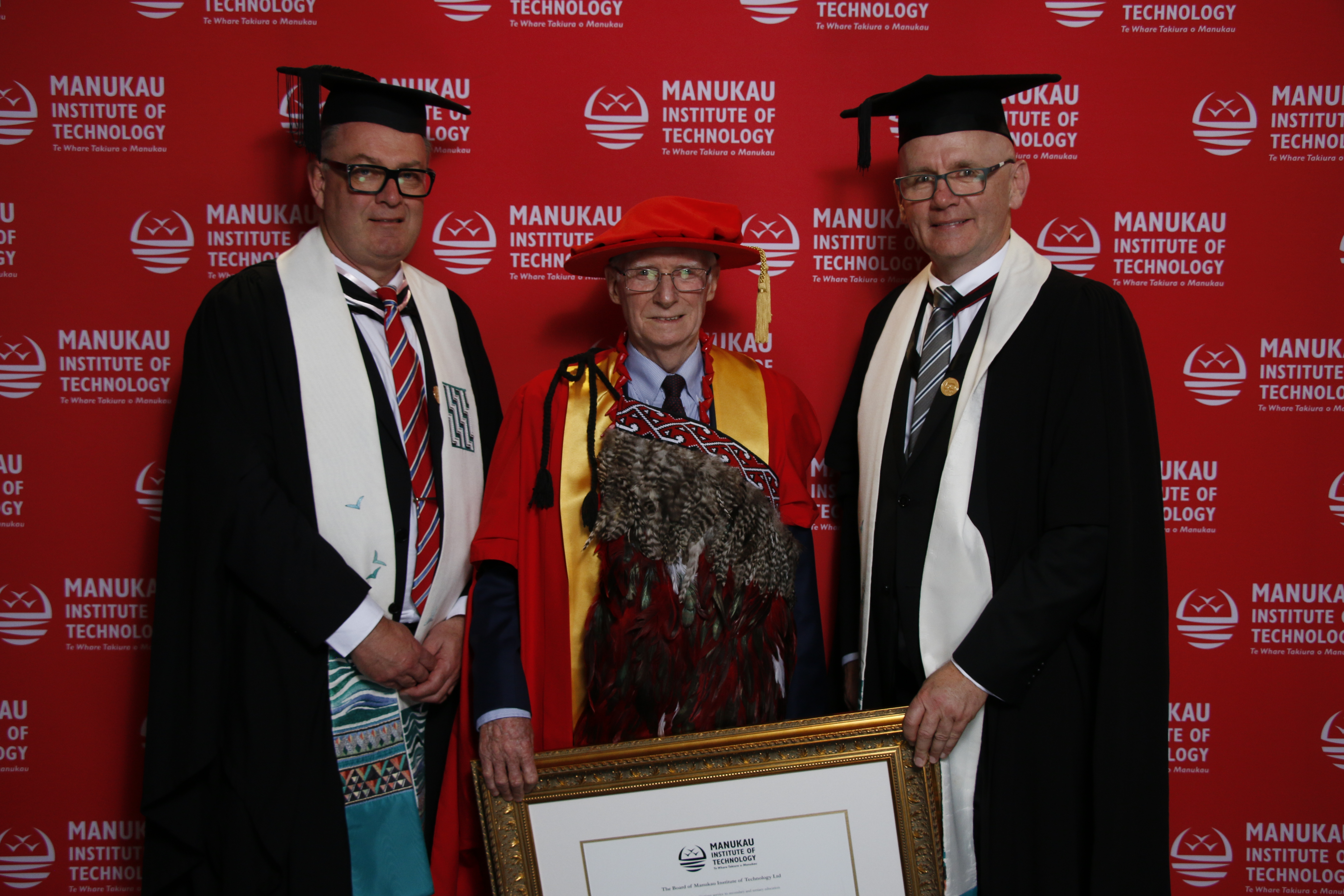 Manukau Institute of Technology has awarded the title of Emeritus Professor to Dr Stuart Middleton for his lifetime of leadership and advocacy ‘levelling the playing field’ in education.

“If someone is in the water, they don’t have a life jacket and they’ve never been taught to swim, it’s a good idea to pull them out,” says Dr Middleton, who is the institute’s Specialist Advisor to the Chief Executive.

“There’s a way of teaching these kids that actually works because the conventional way doesn’t,” he says.

One of his major achievements in changing the way New Zealand students learn was creating the internationally-recognised Tertiary High School model.

MIT’s School of Secondary-Tertiary Studies allows those at risk of disengaging to receive targeted support in smaller classes while also learning vocational skills, increasing their employment prospects and developing a pathway to further study.

“It required intense lobbying, as well as changes to the Education Act and has gone on to benefit hundreds of students, allowing many who may otherwise have withdrawn from education to fulfil their academic potential,” he says.

Dr Middleton has worked in education for more than fifty years, most of that time in South Auckland. His career began teaching English at Papatoetoe High School where one of his pupils was future Education Minister and Mayor of Auckland, Phil Goff.

“Years ago, Stuart Middleton was one of my teachers at Papatoetoe High School. He was impressive as a young teacher and at each stage of his career, he has excelled as a teacher and educational leader. He is driven by a fierce desire to help all students to achieve to their potential. His work has improved the lives of countless students by helping them to attain qualifications necessary to gain good jobs and further study opportunities,” Phil Goff says.

After serving as Head of English at Ngā Tapuwae College, Stuart spent a decade as Senior Lecturer in English at Auckland College of Education. During this time, he attended the University of London on a Commonwealth Trust Relations Scholarship studying ESOL teaching with a strong emphasis on multicultural education.

In 1990, he was appointed Principal of Aorere College before returning to the college of education as Director of Secondary Education from 1997 to 2002.

He joined MIT in 2002 as Director of Student Services and has since supervised nearly every senior portfolio.

“We have been extremely fortunate to have someone of his intellect, creativity and drive with us for so long. Stuart saw an important group of learners were being underserved by the education system so set out to change to the model,” says Chief Executive, Gus Gilmore.

“His work forms the foundation on which our institute’s future efforts to deliver ōritetanga, educational parity for all our learners, rests,” he says.